Wheelchair user Helen, who lives in Hook, Hampshire flew out to Wisconsin, USA, in August to take part in the women’s competition and came fourth place in the world, having only been formed as a team 10 months before.

Helen said: “There was a mixture of excitement and nerves. Canada and USA teams are steps ahead of us and are amazing on the ice. It feels like they were born on the ice. There were nerves thinking that ‘we're going up against the best in the world’ but excitement to have been chosen to represent GB.”

Helen, who also enjoys playing basketball, got into ice hockey through a friend in 2018 when a women’s national team was being put together.

When Helen was selected to be part of the 13-strong GB team, there was plenty of travelling around the country and abroad to Australia and Czech Republic for development training which involved on and off-ice activity. 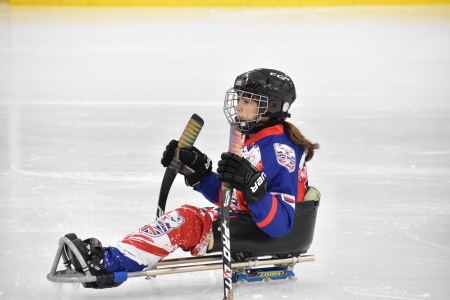 "There's nothing like the feeling of being on the ice.”

Helen explained: “As well as ice practice, we had classroom sessions looking at theory, rules and regulations, and nutrition and exercise, because some of us are new to the game and there’s limited time on the ice to learn these things.

“We were going into the competition as underdogs really, but it provided us with experience and team building so hopefully we’re going to progress from it and reach medal positions. There’s still a lot of hard work to put in.”

The team are off to Canada in January 2023 to scout out further competitions and to spread awareness of para ice hockey, particularly for women, in hopes of creating a paralympic team, as only a men’s team currently exists.

“The team’s aim is to grow the sport not just for GB, but for the rest of the world. By competing in the US, we wanted to encourage more women to get involved in the sport so that it can eventually go on to the Paralympics. Women's ice hockey isn't part of those games yet because there aren’t enough teams in the world to compete. That's the future goal.”

Helen urges others to give the sport a go by getting in touch with any local teams.