Two digital products, used by Southern Health NHS Foundation Trust designed to engage families and young people are in line for national awards, recognising the important role they have played in facilitating access to trusted health and wellbeing advice during the Covid-19 pandemic. 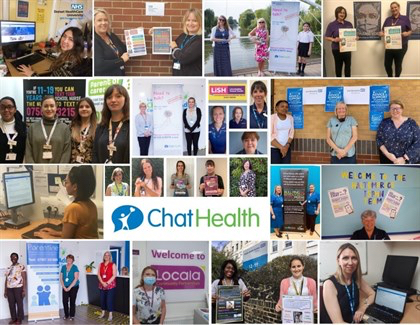 ChatHealth, a secure text messaging platform that supports confidential conversations with health professionals, was developed by Leicestershire Partnership NHS Trust (LPT) in 2013 for use within the school nursing service. Since then, it has been adapted for use in a range of services by 50 NHS organisations across the country, including health visiting, sexual health and perinatal mental health. It is now available to more than 2.2 million young people, and to the parents and carers of 1.6 million children. Southern Health NHS Foundation Trust offers ChatHealth in Hampshire for to support parents of children from 0-5, 5-19 years and a direct service to young people.

ChatHealth has been shortlisted in the prestigious Nursing Times Awards 2020 in the Nursing in Mental Health category. Winners will be announced in a virtual ceremony on 18 November. It has also been shortlisted in the Tech Project of the Year and #HealthTechToShoutAbout categories of the HTN (Health Tech News) Awards, which recognise great technology, partnerships, teams and innovations making a difference across health and care. The winners of these awards will be announced on the evening of 22 October.

The Health for Under 5s website (www.healthforunder5s.co.uk) was launched by LPT in January 2018. It completes a suite of public health websites that support 0-19 services (health visiting and school nursing). The other two websites are Health for Kids (www.healthforkids.co.uk) and Health for Teens (www.healthforteens.co.uk), both of which are also nationally award-winning. Working in partnership with LPT,

Southern Health NHS Foundation Trust are due to launch the local health pages for Hampshire at the end of October and will update the pages as necessary with the most useful and current information.

Health for Under 5s is promoted by midwives and health visitors from the antenatal period as a first port of call for parents and carers looking for trusted health advice relevant to their children’s age and stage of development. Health for Under 5s has been named as a finalist in the Digital at the Point of Care category of the HTN awards.

During the pandemic, both ChatHealth and Health for Under 5s have provided a real lifeline for families. Between April and July this year, 11 new ChatHealth messaging services were launched across the country, enabling healthcare professionals to reach vulnerable people dealing with issues exacerbated by Covid-19. Incoming messages to the service have increased by 50 per cent during these months. Similarly, Health for Under 5s has experienced a more than 200 per cent increase in users and sessions in the first half of 2020 compared to the same period last year, with the number of page views rising to over 66,000 compared to just under 26,000 in January – June 2019. Innovative video resources created especially for the website, have proved especially popular. These include the ‘Bumps to Babies’ antenatal sessions which have supported prospective parents to prepare for the birth of their babies at a time when face-to-face group sessions have had to be suspended. The overview page with links to all four Bumps to Babies videos had nearly 3,000 views between March and July.

The success of these innovations in Leicester, Leicestershire and Rutland has generated significant interest and uptake from other NHS Trusts looking to provide more digital support for their service users. LPT’s digital development team is working with a number of public health teams to launch versions of Health for Under 5s with tailored information on local services later in the year.